Japanese beetles are a scourge on the landscape of both the United States and Canada (similar to the emerald ash borer). If you maintain healthy grass, landscape design or a garden, then you are probably used to seeing your trees, fruits or grass turning brownish as defoliation sets in. A Japanese beetle trap is often put in place to prevent them from causing significant defoliation to your greenery.  This leaves behind the distinctive skeletonized leaves and an overall brown cast in place of lush green vegetation.

They are probably the worst insect pests in the Eastern United States and will begin their destructive feeding around late June every year when the adult beetles emerge from the ground. Homeowners and gardeners have grappled with the Japanese beetle menace for more than a century and they are still here. They cause damage not only to the lawn and leaves but also to the grassroots and organic matter in the garden or grass. Their larvae are less noticeable but are just as destructive.

The Size of a Japanese Beetle

If you live in North America you may have already a Japanese beetle. They are about 15 millimeters in length and have a greenish shiny metallic color on their front. On the back, they maintain a reddish-brown color with almost a smooth coat. They have little tufts of white hair on each side of their abdomen and are as tall as they are wide. Just like their impact on the landscape, they also have a very distinctive look. Recognizing one is often easy as long as they are not caught up in long grass where it is difficult to see them due to their small stature.

Origin of the Japanese Beetle

However, with the opening up of Japan during the Meiji era in the late 19th century and increased trade with the rest of the world, particularly the U.S., the beetles eventually found their way to the United States at the turn of the 20th century. Their first recorded presence in the country was in 1916 and since then, they have been seasonally wreaking havoc across the country. As summer sets in every year, they begin emerging and feeding on select fruits and plants. 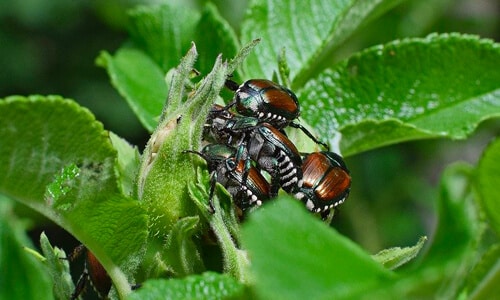 What do the Japanese Beetles Feed on?

As we shall see, they exhibit a very distinctive feeding behavior with a preference for certain kinds of vegetations although they generally feed on between 300 and 350 species of trees, flowers, ornamentals, grasses, and other vegetation.

Some of the most preferred food of the Japanese beetle includes the Linden trees, raspberries, grapes and crabapples. They prefer roses and grapes the most. Japanese beetles will typically feed on the green shoots and leave the leaf veins standing thereby skeletonizing the vegetation. This distinctive damage to the vegetation usually leaves behind mesh-like or lace-like brownish cover on your vegetation once they are done feeding.

The defoliated plants do not necessarily die; they always recover. However, the Japanese beetle’s defoliation leaves behind an ugly vegetative cover. In places like golf courses, the brown cast of vegetation ruins the lush look of the landscape. Of course, the effect is likely to be worse in your orchards where the defoliation will have a direct impact on the fruit yield.

Life Cycle of a Japanese Beetle

In its life-cycle, the Japanese beetle exhibits a complete metamorphosis, that is, it goes through the complete transformation from the larval stage to adulthood. The young beetles do not look like the adult beetles. During their growth cycle, they metamorphize into a completely different insect. In the eastern parts of the US, the adults typically emerge around late June or early July. The emergence of the adult Japanese beetles can extend for two or three weeks. It can take even longer depending on the climatic conditions.

The peak emergence happens around the middle of the year. That is when they begin causing serious destruction of the foliage. The seasonal life cycle of the Japanese beetles proceeds as follows:-

Fall: During fall, the eggs will hatch into grubs. The grubs will feed on the grassroots and the life cycle starts once again.

The Japanese beetle is an insect that exhibits preferential eating behavior. This can make control easy as you can choose to grow the plants that they don’t typically feed on. If you are going to grow their ‘preferred’ plants, then you will have to plan rigorous control measures.

The plants that they dislike include:

The plants and trees that the Japanese beetles prefer the most include the following:

The Japanese beetles are very resilient insects and because of this you will need a well thought through Japanese beetle trap. It can be difficult to get rid of them entirely. However, by employing a combination of biological, chemical and mechanical control methods, it is possible to drastically minimize their destructive impact.

Below is an overview of some of the most common control techniques used to get rid of the Japanese beetles: 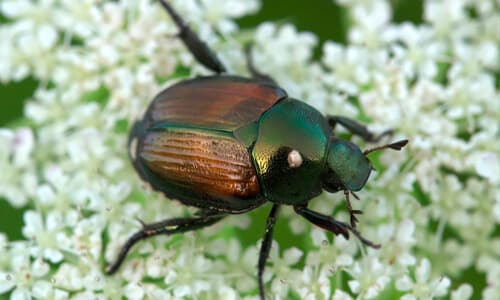 Neem oil is one of the most recommended control techniques by many landscaping experts and homesteaders. How does it work? Is it any good? You can use neem oil and sprays on your roses. It contains potassium bicarbonate. When an adult beetle ingests the chemical that is contained in the oil and passes it on to their eggs, the larvae that hatch will not complete the metamorphosis and dies before it reaches the adult stage.

The drawback is that it is easily washed away by rain and can also pollute waters and have an adverse impact on aquatic life. Neem oil can work in small gardens during the dry months or dry weeks. However, it is not suited for large-scale control and management of Japanese beetles.

Insecticides will work when Japanese beetles are still in the larval stage and the grubs are actively feeding on the roots or soil surface. This is usually in late July or mid-August. There are newly formulated insecticides that will have sufficient residual activity to decimate the grub populations as they move closer to the soil surface in the months of late July to mid-August.

Avoid using the insecticides during the late fall and early spring as the grubs are generally bigger and many not even be feeding on the grassroots. Timing is crucial to the efficacy of insecticides as a control measure. For the best results, ensure you apply the chemical evenly. It should also be mixed thoroughly with water.

Before you purchase an insecticide to be used in controlling Japanese beetles, consult the local cooperative extension for information on the insecticides that have been approved for use in your locality.

The sprays should be applied in the morning hours. Never apply insecticides at the full sun or when temperatures are above 90 degrees Fahrenheit.

Another type of Japanese beetle trap is to control them with beneficial nematodes. This entails drenching the turf with parasitic nematodes that will control the larvae before they mature into adult beetles. The nematodes are applied on the sod when the white grubs are still at a very early stage. The lawn must also be sufficiently irrigated before and after the application of the nematodes.

The most effective preparations are those that have the Heterorhabditis species. There are other marginally effective strains such as Steinernema carpocapsae which is sold commercially by various brands such as Biosafe, Exhibit, Biovector, and Scanmask.

There are countless videos on YouTube that demonstrate the efficacy of a Japanese beetle trap in controlling the beetles. The traps are highly effective at attracting beetles and they can take a lot of them out of the ecosystem at a go.

This is a mechanical control measure and it can be satisfying seeing so many destructive beetles trapped overnight or after a few days. However, as a control measure, it doesn’t really suppress the beetle population in a significant way.  The number of beetles trapped is usually only a drop in the ocean. Beetle traps do not take out enough beetles to stop the defoliation and destruction of vegetation. You can lay many traps and indeed trap hundreds of beetles but the destruction of your landscape or gardens will proceed almost unimpeded.

Besides, laying traps will result in a higher localized beetle population. To avoid the impact of this localization of beetle activity, it is advisable to lay the Japanese beetle trap far from the target plants in order to draw the beetles away from your favored plants or flowers as they make their way to the traps. It is also advisable to use the trap only if everyone else in the neighborhood is also deploying them to avoid the potentially devastating impact of the localization of beetle populations which is likely to accelerate damage to the foliage.

There are various concoctions that you can use to devise a Japanese beetle trap. You can watch how many of these are formulated on YouTube (example).

One of the simplest is the fruit cocktail trap. Simply purchase a can of fruit and allow it to sit in the sun and ferment. You can then place the can on a woodblock inside a pail of water and the beetles will drown in the water as they try to make their way to the fruit can. The pail should be at least 25 feet from the plants you wish to protect from the Japanese beetles.

As we have noted above, the Japanese beetle exhibits preferential feeding behavior. There are certain trees that they are more likely to forage on such as Linden and raspberry and there are those they are likely to avoid such as arborvitae and hickory.  Check out the full list above.

By planning your gardening or landscaping around plants that the Japanese beetles don’t particularly prefer, you can spare yourself the headache of having to scramble partially effective control measures every year.

Systemic insecticide usage is a more medium-term and selective technique for managing Japanese beetles. The active ingredient known as imidacloprid is applied directly to the soil as a drench and is then taken up by the roots of the plant. The active ingredient gets into the beetle and kills the beetle only when the foliage is consumed which ensures that the non-pest insects aren’t affected by the insecticide. Systemic insecticide treatment is a preventative measure and must be applied ahead of time to have any appreciable impact.

Remove the Grubs from the Turf

You can also control the Japanese beetle infestation in the grub stage during late spring and in fall by spraying the turf with a mixture of liquid dishwashing soap and water. Use 2 tablespoons of the soap and a gallon of water for every 1,000 square feet. This formula will force the grubs onto the surface where they can be preyed upon by birds and other predators. You can do the sprays once every week until there are no more grubs coming to the surface.

Managing Japanese beetles involves using a combination of management measures. There is no single magic bullet to get rid of these pests altogether. However, by consistently and correctly using these control measures, you can reduce their destructive impact to a minimum in order to keep your landscape healthy. It is also advisable to proactively manage your landscape by keeping the plants healthy and getting rid of diseased and ripening fruits that are likely to attract the beetles. 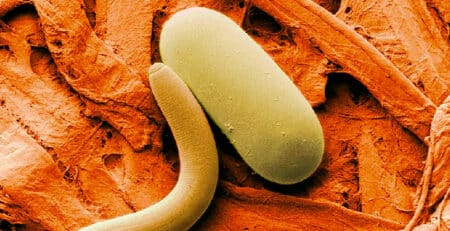 When to Apply Nematodes in Controlling Grubs and Larvae

What is the best time to apply nematodes to control larvae and grubs? In this article, we will look... read more

How to Get Rid of Emerald Ash Borer – Tree Removal

If you’re reading this, you may be concerned or wondering "how to get rid of Emerald Ash Borer in... read more